Every year I make a resolution to blog more and every year I am lucky if I do one or two blogs so I am not promising more blogs. While the rest of the world is waking up to the first day of 2017, it is late afternoon here in Australia. For breakfast I made blueberry pancakes however the blueberries sunk into the batter and didn’t turn out as pretty as I wanted them to.

2016 was a year of travel for me, some short trips, some not so short trips. I went to Brisbane in February to visit my best friend and her beautiful little family, In June I spent a week in paradise on Hamilton Island exploring surrounding Islands and the Great Barrier Reef, in September I went further abroad and visited Ireland and The UAE, in November I went down to Melbourne to accept my award from work #1 Sales Support (within the Network) in Australia and finished up the year spending Christmas with some of the Family in Byron Bay. 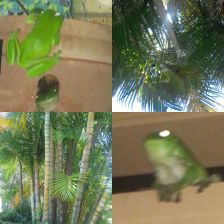 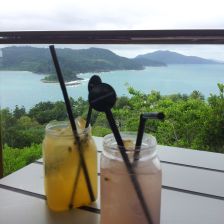 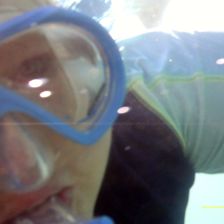 One of my bestest friends moved back to Mexico at the end of 2016 and I already miss her sooo much, hopefully more travel is on the cards in 2017! I am going to Mexico to see my Amiga!

For New Years Eve the weather was cloudy, hot and not the sunny Sydney I am used to so I decided to stock up on liquor and snacks and stayed in and had a cocktail party for 2!

Usually we make the pilgrimage down to Sydney Harbour to watch the $7million dollar fireworks extravaganza but this year I decided you know what No! No to crowded public transport, no to standing shoulder to shoulder with 1.5 Million sweaty strangers, no to bathroom ques so long you just want to go home and no to overpriced drinks and cover charges in clubs.

For my cocktail party I decided to use my nutribullet to blend some ice cubes, fruit and spirits off the top of my head and they turned out pretty well. After getting a bit tipsy we decided to stick to more traditional recipes that didn’t involve blending and made some pretty tasty food to  compliment the drinks.

Below is the home made pizza, we used a pre made fresh pitta bread base and I added tomato’s, spinach, green capsicum, breast chicken and tasty cheese.

For snacks I cut up some celery, got some crackers, smashed some avocado, got a pre made taziki  and a guacamole, the other half is into cheese and salmon so I put some on a plate to the side, we also had a mix of lollies, grapes and chocolate to complete the snack.

After we had eaten it was time to get mixing, I chopped up some limes, apples and kiwi fruit and we got creative. I named the following Karla’s Ninja Turtle as I am sure that a drink somewhere out there is already called Ninja Turtle.

Put in nutibullett blend until smooth and drink

I found the apple made it a bit cloudy and gave it a froth on top, it was a bit sweet and the next one we added more lime to make it less sweet.

After experimenting with the apple we moved onto Kiwi fruit this was pretty much the same recipe  as above except with Kiwi Fruit, I found the kiwi fruit made it really tangy and if I do kiwi again I might stick to the recipe book.

By now we are tipsy and over using the nutribullett and decided to make our own take on the shot with a naughty name “Wet Pussy” at this stage I thought it was called a “QF” and decided to call this one the Slow F.

We also tried this replacing tequila with vodka.

Did I forget to mention our freezer is too small to put the ice in and we had the ice inside 2 supermarket cooler bags on the floor. By this stage the ice was melting and the cooler bags dripping water onto the floor, so we moved them to the bath tub.

With the ice cube stock depleting (melting in our bath tub) and the lack of desire to chop fruit we moved onto shots.

Surprisingly we stayed awake until midnight and saw in 2017. By this stage we had cracked out glow sticks and played music from 1999 ( Our own little tribute to Prince) We partied like it was 1999!

At 12 we sent out a blurry selfie to our nearest and dearest, taken in the dark (so you could see our glow sticks of course) and then went off into a sound sleep.

I traditionally take a photograph of the first sunrise of the year however I got up a few hours later to discover much like the previous day the sunrise was nothing special just a soft cloudy glow, so I didn’t bother to get my camera and just crawled back into bed, I will leave you with the stunning sunrise that was New Years Day 2016 and wish you all a very happy healthy 2017!

If you have not already done so SUBSCRIBE  below for new posts! I promise I wont spam you, the only emails you will receive is notifications when I upload a new post.